Oil and water don’t mix but they do form emulsions – and these are crucial to the consistency of a number of foodstuffs. Nature is good at making emulsions, and the classic example is milk, where a complex mixture of fat droplets are suspended in an aqueous solution.

Emulsifiers are the chemicals that make emulsions happen. Nature uses proteins and phospholipids, and many emulsifiers used in modern food production are based on these natural substances. 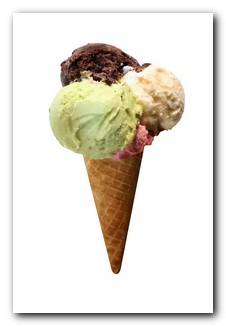 An emulsifier is a molecule in which one end likes to be in an oily environment and the other in a water environment. To make an oil-in-water emulsion, such as mayonnaise, droplets of oil molecules are surrounded by the oil-loving end of the emulsifier molecules. This leaves the water-loving ends on the outside of the droplet, and so they sit happily in water, giving a homogeneous liquid rather than an unappealing mixture of water and oily droplets. In mayonnaise, the emulsifier is the phospholipids present in egg yolks – they are such successful emulsifiers that as much as 80% oil can be dispersed in the aqueous phase.

Ice cream is another food that would not exist were it not for emulsifiers. It is both a foam and an emulsion, and its texture results from the ice crystals and unfrozen water it contains. But it’s not just creamy products where emulsifiers are crucial – bread and other baked products, where solid particles are dispersed in an airy foam, are enhanced by emulsifiers.

The emulsifiers that are used commercially come from both natural and synthetic sources. They include:

Lecithins (E322) are mixtures of phospholipids such as phosphatidyl choline and phosphatidylethanolamine, and are usually extracted from sources such as egg yolk and soybeans. The precise composition of the phospholipids depends on the source. Uses include salad dressings, baked goods and chocolate.

Esters of monoglycerides of fatty acids (E472a-f) are made from natural fatty acids, glycerol and an organic acid such as acetic, citric, lactic or tartaric. The fatty acids are usually from a vegetable source, though animal fats can be used. Products that use them include ice cream, cakes and crisps.

Mono- and diglycerides of fatty acids (E471) are semi-synthetic emulsifiers made from glycerol and natural fatty acids, which can be from either plant or animal sources. They are used in products like breads, cakes and margarines.