Many powdery and granular food products have a tendency to absorb water and clump together. Whether it’s table salt, icing sugar, non-dairy creamer, instant soup or even grated parmesan cheese, if the ingredients don’t flow freely then they are difficult to use. Salt cellars wouldn’t dispense salt, drink vending machines would block up, and the parmesan wouldn’t spread evenly across the plate.

Anti-caking agents are used to prevent this problem. Many are natural products such as talc and bentonite, 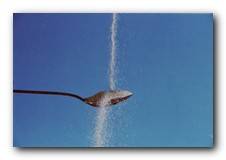 and others are manufactured from natural sources, such as silicon dioxide and several silicates. They don’t modify the food itself – they just make it less ‘sticky’, often by soaking up water.

Bentonite (E558) is a naturally occurring porous volcanic clay, which is used as an anticaking agent. It is also used to remove proteins from white wine, which would otherwise make it go cloudy.

Calcium silicate (E552) is made from chalk, limestone or diatomaceous earth, and is commonly used as an anticaking agent in dry products.

Silicon dioxide (E551) is common in nature – it is the main component of sand. It is used to improve the flow of dry products, and also to absorb water.

Sodium aluminosilicate (E554) is a synthetic mixture of sodium, aluminium and silicon oxides which is used as an anticaking agent.

Talc (E533b) is a natural mineral, which is made from hydrated magnesium silicate. It can be used in many different food products to prevent clumping.