The modern desire to eat sweet foods that don’t make you fat has led to the development of a variety of low calorie intense sweeteners that are much sweeter than sucrose, and only need to be used in tiny amounts to satisfy the taste buds. They aren’t a modern invention – the first, saccharin, was first produced back in 1878.

If it weren’t for artificial intense sweeteners, the only way to satisfy a sweet tooth would be with natural sugars such as sucrose, fructose and maltose, which are full of calories and contribute to tooth decay.

Most food products use blends of sweeteners. Regulations limit the maximum use levels for 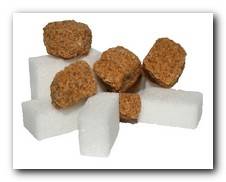 individual high-intensity sweeteners, and each has its own unique taste profile, such as metallic, bitter, lingering or delayed onset. Synergistic effects also mean that the mixture can often give an even more intense sweetness than the individual components alone.

However, these ingredients can only replace the sweetness of sugar, and not its bulk, so in products like cakes and jams, something else is needed if sugar is going to be replaced. This is where bulk sweeteners come in. These are derivatives of sugars, and while they are not as sweet as sucrose, they have fewer calories as the body metabolises them differently. They do not raise glucose levels in the blood, and so can be consumed by diabetics. However, many can have a laxative effect when consumed in large quantities.

Low-calorie and diabetic foods frequently contain a combination of both intense and bulk sweeteners, with the former producing the sweetness and the latter the texture that consumers expect.

Erythritol (E968) is a naturally occurring sugar alcohol, which is made commercially by the fermentation of glucose, and was only approved for food use in Europe in 2006. It is about two-thirds as sweet as sucrose, but has almost no calories. As it is absorbed before it reaches the colon, it does not have the laxative effects of some other bulk sweeteners – instead, it is excreted unchanged in the urine. It is also tooth-friendly as it does not contribute to tooth decay

Isomalt (E954) is a sugar alcohol with similar physical properties to sucrose, but it is tooth-friendly and has half the calories. It is becoming increasingly popular in confectionery products such as hard candies, but like many bulk sweeteners it can have a laxative effect.

Lactitol (E966) is a bulk sweetener that is about 40% as sweet as sucrose. It is common in bakery products because of its heat stability, and it is also found in confectionery, chocolate and ice cream.

Maltitol (E965) has about three-quarters of the sweetness of sugar, but about half of its calories, and it does not promote tooth decay. However, it can have a laxative effect. It is particularly common in confectionery products like hard candies, chewing gum and ice cream.

Sorbitol (E420) is the oldest of the bulk sweeteners. It is commonly found in diet food and drink products, as well as confectionery such as mints and sugar-free gum. It is found in rowan berries, but as a food ingredient it is made by chemically modifying glucose.

Xylitol (E967) is a naturally occurring sugar alcohol was first commercially extracted from birch trees. It has about two-thirds of the calories of sugar, and does not cause tooth decay. It is found in a wide range of confectionery products, but sometimes has a laxative effect.

Acesulfame K (E950) is about 200 times more sweet than sucrose. Invented in Germany in 1967, it leaves a slightly bitter aftertaste in the mouth, which means it is rarely used alone as a sweetener. Unlike some other intense sweeteners, it is heat-stable during cooking. Common uses include bakery products, and soft drinks, where it is usually blended with other sweeteners, and as a sweetener for hot beverages. 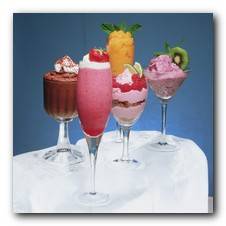 Aspartame (E951) is a sweetener that was invented in the US in 1965, and contains two amino acids joined together by a chemical bond. It is about 200 times sweeter than sucrose, but as it breaks down on heating it is not suitable for baking applications, although it can be added to hot foods before serving, such as hot drinks, stewed fruit or porridge. It is commonly found in soft drinks and confectionery products. People with the rare condition phenylketonuria cannot metabolise one of its constituent amino acids, phenylalanine, and so must try to avoid it. This is why product labels have to state ‘contains a source of phenylalanine’ if aspartame is an ingredient.

Cyclamate (E952) is about 30 times more sweet than sugar, and it is usually used in combination with other sweeteners.

Saccharin (E954) has been used as an intense sweetener for more than a century, and is 300-400 times sweeter than sugar. It is commonly used in carbonated drinks in combination with aspartame. There have been concerns that it might cause cancer over the years, but these health scares have been dismissed.

Sucralose (E955) is the newest of the intense sweeteners and is about 600 times sweeter than sugar. It is made by replacing three of the alcohol groups in sucrose with chlorine atoms, which dramatically increases its sweetness. It is heat-stable so can be used in bakery products. It is becoming increasingly popular in products from soft drinks to confectionery to hot beverages.